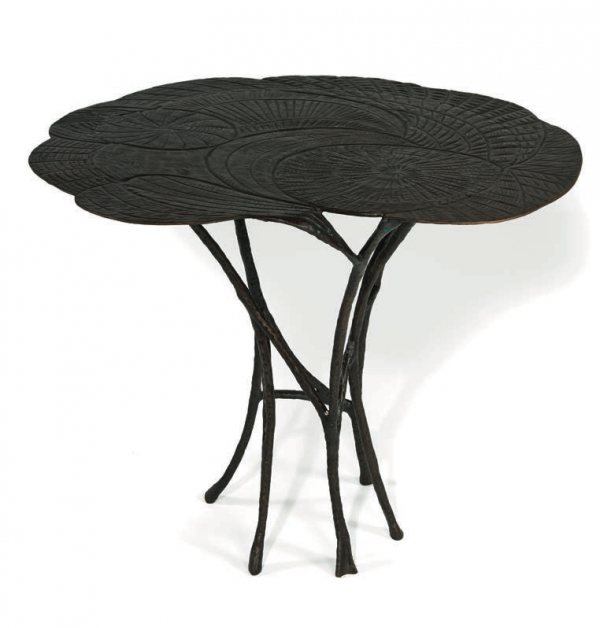 Franck Evennou uses bronze like a poet uses words. He uses the language of matter to re-invent a poetic form inspired by nature and transforms materials that bear the mark of time, with a mixture of nostalgia and respect for the past.

He applies his art to a limitless range of creations: sculpture, furniture, decorative objects, jewellery. They function as a pretext for him to express his ideas in dream-like and organic forms.

His preferred materials are wood and bronze of different patinas ranging from gold to brown. His working method is artisanal and traditional, and each piece is not only limited, but also numbered and signed.

He is represented by the Galerie Avant-scène in Paris. Their collaboration has led to the creation of numerous pieces for collectors and embassies, including notable works such as the monumental gate to the French Embassy in Beirut, commissioned by the French Foreign Ministry, banisters for mansions, and a decorative screen for a chapel.

For many years he has worked with the Contrasts Gallery in Hong Kong and Shanghai, created objects, chandeliers and furniture for Daum, as well as jewellery for La Monnaie de Paris and limited editions for En Attendant les Barbares. He has also created numerous collections for decorative art manufacturers.

He has worked for public institutions for whom he has created some spectacular work such as the sculptural Prime Minister's Desk for the Mobilier National and a bronze forest for the Musée de la Chasse et de la Nature in Paris. Architects and interior designers from Europe, the United States and the Middle East have called upon him to create personal work to order.